This definitely wasn’t Jason’s kind of weather. He looked through the window and felt a cold chill on his back. The long, thin tree branches scraped against the wet glass and resembled a terrifying old man’s fingers. „Ding!” He looked at his phone. He just received a message from Lydia. 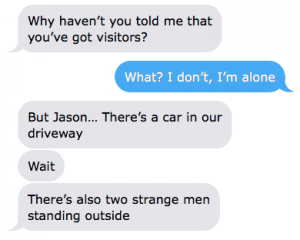 Suddenly, he heard a loud knock at the door. „Damn!” he almost screamed „I’m coming, I’m coming!” Jason put on his house slippers and went to find out who was there. Two men stood at the door – both were tall and muscular with broad shoulders. „Ding!” Lydia really didn’t wanted him to open that door. 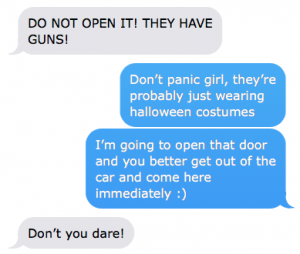 Jason was really annoyed. Sometimes he was wondering if he shouldn’t turn off the TV in their house for a while. He took a deep breath and opened the doors.

„Good Evening, gentlemen. How can I help you? I guess you aren’t trick or treating,” said Jason and smiled. „Jason Whittemore? I am deputy Jordan Parrish and we’re from the state police department” said the man who looked like he was the older of the two.

„Yes, that’s me. Do you want to come in?” the man nodded. „Ding!” Jason looked at his phone 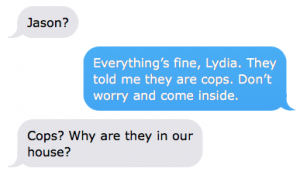 „We are here because of the Scott McCall. Do you know him?” said the other man.

„Of course, he’s my boss” answered Jason „We’ve worked together for as long as I can remember.” The older cop nodded gently.

„Do you know if he has any enemies?” The younger officer didn’t want to wait for Jason’s answer and interrupted Jason before he could respond „Or maybe you were jealous of his position?”

„Wait. What are you getting at?” Jason could hear his heart beat faster.

„Mr McCall is dead and you are one of our prime suspects.” the young policeman said bluntly. „You are coming with us.”

Lydia heard the metalic sound of a key and then she saw Jason. Two tall, muscular men were holding him and then she noticed handcuffs on his wrists.

„Get out of the way, lady” said the older looking man.

Are you wondering why Jason has been arrested in connection with Scott McCall?

Jason has been accused of stealing important information from the company, including new IT solutions and employee personal data. Publishing that kind of information caused not only financial damage, but also harmed Scott’s mental health. Scott committed suicide and Jason must stand trial for involuntary manslaughter.

Who knows that for sure? We know that he was a prime suspect and all evidence pointed to him. In his company only 3 people have access to the central database and he didn’t have an alibi so he couldn’t prove his innocence.

What if we tell you that he would have had someone who could vouch for him as an eyewitness?

This story could have had a happy ending.

If they had used Fudo PAM, then Scott would still be alive (because he would’ve noticed the suspicious activity before it was too late). Furthermore, Jasoun wouldn’t be under arrest because he could prove that he didn’t do anything wrong.

Imagine that you have the chance to record and watch all activities on your company’s servers. All workers have their own personal accounts and you are informed about any suspicious activity. Moreover you receive a notification on your cell phone, when somebody’s trying to access to sensitive data.

Jason Whittemore’s story is based on events that could really happened. You never know what’s going to happen to you, so maybe you should follow some good old advice “Prevent rather than cure”.
That’s why we recommend using Fudo PAM.

When you need to know and control everything within your organization. When you need to intervene at a moment’s notice- that’s when Fudo PAM’s proactive monitoring gives you the power to detect and terminate any suspicious activity.

GO THROUGH HOURS OF FOOTAGE IN SECONDS

Seeing is believing, and with our Full OCR you’re able to get the complete picture, inside and out. Search an entire session and be in the know.

Are you interested in a demo of Fudo Security solution?