Watch out for fake WHO emails – you can get infected with more than Coronavirus! 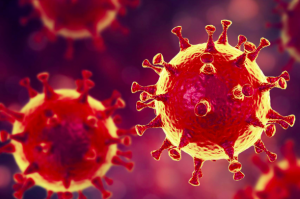 If you had been more careful while caressing yourself, I wouldn’t worry you. I don’t think that playing with yourself is very bad, but when all your colleagues, relatives and friends get a video recording of it – it is definitely bad for you.

The Blackmail Email Scam of 2018-19 affected people all over the world (the exact number is unclear). Most people sussed out the scam for what it was, but, for many others, it clearly had an effect. Websites like Reddit saw plenty of traffic surrounding the emails, suggesting that thousands of people took them seriously enough to at least search online for answers.

Some people even paid the ransom. IBM tracked a series of Bitcoin wallet addresses involved in the scam, twenty of which had earned over $50,000. Check Point researchers found one wallet which received over $100,000 worth of Bitcoin in just five months of scamming.

The Blackmail scam is a useful frame we can use to understand why, in the past three months, a slew of hackers have been leveraging the coronavirus towards their malicious ends.

Last month, the World Health Organization published a notice online: “Beware of criminals pretending to be WHO.” Hackers were leveraging the WHO brand to distribute malware-laced documents. In one case, a set of emails titled “Attention: List Of Companies Affected With Coronavirus” included a file labeled “SAFETY PRECAUTIONS.” Rather than a document, the label was actually an executable file, which downloaded a copy of the Agent Tesla keylogger to victim computers. A similar case making the rounds recently involves a file labeled “CoronaVirusSafetyMeasures_pdf.exe.” While clearly intended to be interpreted as a PDF document with information on COVID safety measures, it is in fact an executable which downloads the Remcos remote access trojan to a host machine.

These cases are hardly unique. In January, when COVID-19 was still relatively localized in East Asia, Japanese-language phishing emails were being used to spread the popular Emotet banking trojan. (Emotet, it should be noted, is a powerful malware with multiple dangerous capabilities. For example, Emotet-stricken computers are commonly rented out to criminal outfits for ransomware attacks.)

A new phishing campaign claiming to come from the Center for Disease Control is clever for a few reasons. Firstly, the hacker–whose IP address routes to the U.K.–effectively used a HELO command to mimic a .gov email domain. This adds an air of legitimacy that would be harder to convey with a non-government domain. Secondly, the link included in the email appears to direct to cdc.gov when, in fact, it redirects to a login page masking itself as Microsoft Outlook. Victims are baited into entering authentication information before being redirected to the CDC’s actual website.

These emails are perhaps even more impressive from a social engineering perspective. They mask the hacker’s intentions by providing real (unofficial) advice on prevention. And they play exactly into our worst fears, by claiming “three new cases have been confirmed around your location today.” 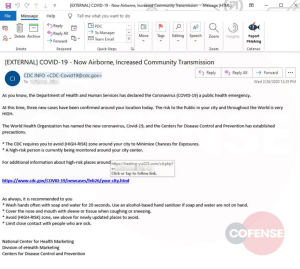 Other similar cases include a campaign distributing the Lokibot under the guise of China’s Ministry of Health, and a three-page Coronavirus-themed document purported to come from Ukraine’s Ministry of Health which, in fact, includes macros that download backdoor malware with keylogging and screen capture capabilities onto a target computer. The latter case was particularly notable in its timing. Just a couple of days before it was spotted, violent protests erupted in Ukraine’s capital city of Kiev over a fake news story which also purported to come from the Ministry of Health, regarding an inbound flight to China that brought the virus to Ukraine.

Over half a dozen unique Coronavirus-themed malware attacks are making the rounds in the U.S., Europe and East Asia. While they differ slightly in approach and content, they all root from one, underlying truth: that humans are least rational when fearful.

In all likelihood, hundreds or even thousands of people around the world today will follow fake Coronavirus links and files being spread by malicious actors. The best thing each of us can do is be vigilant. Consider whether the organization an email purports to be from would actually have your email address in their books. Scrutinize the name of attached files and links. Note that an apparently legitimate email domain is not in itself evidence of an email being from a legitimate source, nor is the use of an official letterhead or company logo.

If you’re concerned about phishing emails, but still want information on the virus, here are the legitimate COVID-19 websites maintained by the WHO and CDC: